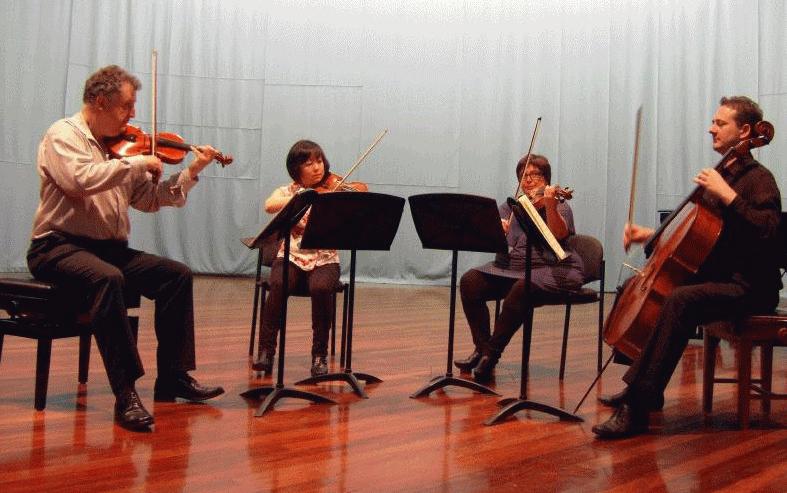 The Diemen Quartet was formed in 2011 by four musicians who having collaborated in many concerts together decided to give more regular performances together. Over the coming year they will be exploring the works of Beethoven and his contemporaries and will be giving concerts throughout Tasmania. You can hear them perform at St David' Cathedral at 1pm on October 27th and again at the Kettering Concerts series on October 30th at 3pm.

In 2012 Diemen Quartet will be quartet in residence at the Conservatorium.

Born in Shanghai, Yuen Yum was the first recipient of the Hong Kong Government Music Scholarship to study at Wells Cathedral School, England, going on to graduate from the Guildhall School of Music and Drama. In 1986 Yuen Yum joined the Orchestra of St John's Smith Square, touring both nationally and worldwide. She has performed extensively with the London Wren Orchestra, the Bolshoi Ballet, the London Metropolitan Orchestra and the Hong Kong City Chamber Orchestra.

Yuen Yum has worked with musicians as diverse as Igor Oistrakh, the Amadeus quartet and Quincy Jones. Yuen Yum's awards include the Somerset Violin Competition (UK), the Hong Kong Commercial Radio Prize (Twice Winner) and the Hong Kong Concerto Prize. As well as performing, Yuen Yum has played an active role in educating young violinists in London, Hong Kong and Australia. Fluent in three Chinese languages, she has also travelled widely in her capacity as a concert manager and coordinated the 2005 Australian String Quartet tour of China and the 2007 Southern Cross Soloists tour of Hong Kong and China. Yuen Yum is an Associate Lecturer at the Hobart conservatorium UTAS and Principal Music Educator of the Young Conservatorium Program.

Brendan was a member of the Tasmanian Symphony Orchestra for 10 years. During that time he had many appearances as acting principal cello, and also as a guest section cellist with the Sydney Symphony. He played with the Tasmanian Symphony String Quartet, the Tasman Trio, the TSO Chamber Players and Virtuosi Tasmania, in Tasmania and on national and international tours. He has performed regularly as a chamber musician for ABC FM live broadcasts and recordings in repertoire ranging from early music, playing gamba and baroque cello, through to contemporary chamber and solo works.